Josef Pieper and the Lost art of Leisure 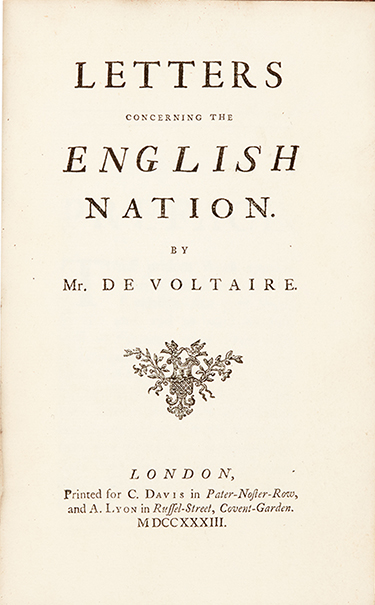 During the years 1726 and 1729, the French writer Voltaire was exiled in England. In England, Voltaire was impressed by what he saw, which was very different from his native France. After returning home, Voltaire wrote a little book, Letters Concerning the English Nation, pointing out a number of areas where the French could learn from English culture, politics, and society.

Voltaire’s sixth letter is particularly instructive. Here he turned his attention to the Royal Exchange in London, which was the eighteenth century’s equivalent of Wall Street. Voltaire saw the market as England’s true religion – a place where people of all nations and denominations “meet for the benefit of mankind.” For Voltaire, the commercialized state offered hope, since it was here that the practitioners of various private faiths could come together for the public good of economic exchange.

Voltaire saw relativism in religion and secularism in society as solutions to the protracted wars of religion that had plagued Europe ever since the Reformation. A state structured around the new religion of buying and selling would enable Jews, Muslims, and the various Christian sects to put aside their hatred of one another and unite in a common cause. In the Royal Exchange, all religious believers could adopt a position of neutrality, interacting towards a common goal.

This short and overlooked letter from Voltaire captured the entire spirit of the “Enlightenment,” and the period of secular modernity that followed in its wake. His basic idea—that the private economy of religion contrasts with the public economy of the market—has become the hallmark of modern secularism. Secularism is quite tolerant of religion, as long as religion stays in its lane, leaving public life to be defined by the liturgies of the market.

With the hindsight of nearly three hundred years, it’s easy to see things a little more clearly.  We know that economic exchange does not coordinate for “the benefit of mankind,” but can be just as oppressive and divisive as religion. And few people would still view commercialism in such a positive light. Yet the basic narrative of Enlightenment secularism—that religion can and should be confined to the realm of the private—has not only achieved widespread acceptance, but also has come to define the self-understanding of most Christians. Believers have been willing to cede to the secular the entire realm of creation, including art, education, media, agriculture, food, psychology, business, law and government, technology and innovation, etc. It is not that Christians have withdrawn from involvement in these arenas, but that the assumptions of secularism have largely defined the terms of their engagement (a point I have discussed in my article “The Abstraction of God and the Culture Wars“). We have largely allowed the narrative of secularism, with its rigid division of life into separate spheres and its spurious idea of religious neutrality, to go unquestioned and unchallenged.

What Voltaire believed about the market—that Christians could leave their faith behind when they entered the Royal Exchange and operate according to the principles of religious neutrality—has become the de facto way secular society has encouraged believers to approach all our jobs. Believers have largely succumbed to this quarantining of our work in the world, either through bad theology of vocation (I discuss some notable examples here) or through uncritical acceptance of secular assumptions. With regard to the latter, the Roman Catholic philosopher and theologian David L. Schindler has lamented that,

The doctrines of creation, incarnation and resurrection break down all the bifurcations that limit the gospel’s potency. The doctrine of creation teaches us that the world God created is good, and that all legitimate aspects of life are fruitful avenues for dominion-taking activities (I have explored this Biblical teaching further in my article “From Eden to New Creation.”) The doctrine of creation achieves its great recapitulation in the doctrine of incarnation, which asserts that the life of God has been joined to the human, initiating a great coming together of what had been apart. The incarnation of Christ has unleashed a gradual supernaturalization of all creation, with transformative effects on all of life. Consequently, it is only in reference to God that everything in the world finds its proper integrity, from the workings of life on the cellular level to the rotation of planets in the heavens. Incarnation culminates in resurrection, through which death has been defeated and new creation unleashed on the earth in anticipation of the time when the entire cosmos will be resurrected to the life of incorruption. Indeed, the theology of creation, incarnation, and resurrection, assures us that there is no square inch of creation that lies outside the compass of God’s work, for all creation finds its coherence in the Logos. Accordingly, our responsibility is to pursue our own callings in ways that acknowledge that: to render all work as Christian work.

As countless numbers of Christians have imbibed the assumptions of Voltaire and the Enlightenment, they have colluded with their own self-isolation, restricting faith to a circumference of specifically “spiritual matters” independent from the concerns of the world, society, and nature. On this schema, the realm of nature operates according to a different set of principles to the realm of grace and faith. Some thinkers have taken this dualism even further to suggest that there was no joining of the created with the uncreated at the incarnation, for the created and uncreated are not merely distinguishable, but utterly distinct—each operating with a separate logic and self-contained epistemology. One Greek thinker—who will remain unnamed, as I don’t relish receiving hate mail from his legion of votaries, some of whom I have already had run-ins with—captured this secularist spirit when he declared,

For the aforementioned thinker, the barrier between created and uncreated hampers our ability to infer truths about the natural world from Sacred Scripture (as he put it elsewhere, “Holy Scripture is not the source of knowledge of created truth, but of uncreated Truth”), or to infer anything about the Divine from the natural world: a great gulf is fixed between grace and nature, faith and reason, uncreated and created, the spiritual and the natural. A walk around the pond with Wordsworth and Keats would have been torture for this teacher and his contemporary fanboys.

This thinker was the 20th century heir of Voltaire, who was himself an heir of the serpent, who first postulated this divided epistemology when he asked, “Did God really say?” Satan’s first temptation was to posit a realm of truth that was independent of God’s truth—an alternate set of principles for the created realm that could be pursued independently of the Creator. Yet many Christians—Protestant, Catholic, and Orthodox alike—have remained content to cede to the “secular” the entire realm of space and time.

This secularized self-understanding of religion has landed Christian with the rather odd spectacle of using concepts like “discernment” and “wisdom” for pedestrian issues or decisions while the broader structural motifs that organize our thinking remain dominated by latent secular assumptions. But true discernment is learning how to think Christianly about every department of life, perceiving the integration point whereby all of life achieves its coherence through creation, incarnation, and resurrection. Thinking Christianly about every department of life is as much a vocation as being a missionary or a member of the clergy, and it is a vocation that every Christian is called to take up.