What Does a Kiss and a Slap Have in Common? Answer: “gender colonialism”

The following is from Robert Roberts’ essay ‘The Blessings of Gratitude’ in the volume The Psychology of Gratitude: 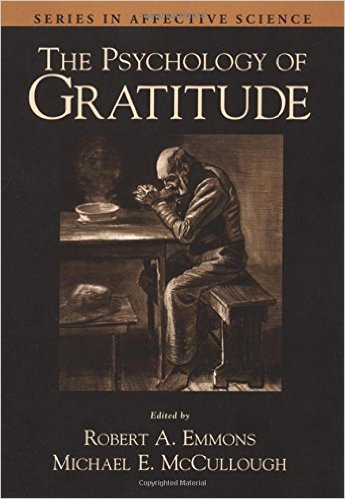 “The constitutionally grateful person has a shield against such debilitating regrets because he or she is inclined to dwell on the favorable, rather than the regrettable. As noted earlier, as an emotion, gratitude is a perception of benefits and benevolence; a person with gratitude-readiness will tend to see what is good in situations and to notice less what is bad. The kind of unfortunate actions and events that make the constitutionally regretful person miserable may have occurred in the grateful one’s life as well, but the grateful person can move on from them, because his or her mind is tuned to happier things….
Grateful people tend to be satisfied with what they have and so are less susceptible to such emotions as disappointment, regret, and frustration. People who believe in God as He is conceived in Christianity have an even more powerful resource for transcending many of the circumstances that disappoint, frustrate, and anger most of us. In consequence, grateful people, whether religious or not, will be less prone to emotions such as anger, resentment, envy, and bitterness, that tend to undermine happy social relations. But the virtue of gratitude is not only a prophylactic against such corruption of relationships; it also contributes positively to friendship and civility, because it is both benevolent (wishing the benefactor well) and just (giving the benefactor his or her due, in a certain special way). The justice of gratitude can be plausible argued to be metaphysical–a kind of attunement to one’s basic human nature and the nature of the universe–because we are in fact dependent recipients of good things, both from some of our fellow human beings and from God. Such attunement is a realization of human nature and thus maturity, fulfillment, well-being.