(I wrote the following post a few days before the tragedy in Paris, which is timely in light of what I said about the safety of our middle-class homes. The thought-experiments that pacifists normally avoid (see below) are no longer simply thought experiments, but realities we are having to deal with close to home. When commenting about this post on Facebook after the Paris tragedy, I observed “I am never going to be a fighter. I want my boys to learn self-defense, but I have little interest in personally learning to fight. Moreover, I am scared of guns and chain saws. But I am not a pacifist because I admire and support the warriors who are fighting against ISIS to keep the rest of us safe. And I pray for their victory.”)

In this post I wish to explain my thoughts on why Christians shouldn’t be pacifists. I might be wrong, and welcome feedback, but this post represents my thinking at the moment.

I discussed this distinction in my Colson Center article ‘Guns and Killing (3)‘, where I used the example of vegetarians. While a hundred meals of vegetables won’t turn you into a vegetarian, it only takes one hamburger to end your existence as a vegetarian. In the same way, advocating non-violence in most situations won’t turn you into a pacifist, but advocating violence in even one situation will spell the end of your existence as a pacifist. To quote from my article:

In the early church, non-violence was widely practiced. Martyrs like Saint Ignatius, Saint Justin Martyr and many others looked upon it as an honor to die for Christ and they even turned down opportunities to escape or defend themselves. However, the early church never crystalized the practice of non-violence into a rigid ideology. If they had, then we would expect to see men like Saint John the Baptist and Saint Paul telling Roman soldiers to forsake the army. Instead, these teachers instructed soldiers to serve God within the army.

In American society, the opportunities to testify for Christ through non-violence will obviously be less than in the early church. This is because our society expects citizens to help keep our communities safe, and everyone has a statutory duty to intervene if they see injustice in order to help protect law and order. While this is a blessing, it can make it easy to overlook the fact that sometimes the most powerful way to submit to Christ is to endure violence without resistance. At the heart of our faith stands the cross, where Jesus Himself willingly surrendered to his attackers instead of engaged in acts of self-defense.

As I talk to different Christians within the pro-gun lobby, I find a reluctance to acknowledge the legitimacy of selective non-violence. This perspective was encapsulated by one Christian teacher who wrote on the internet that failure to defend oneself makes a person complicit in his own suicide. By that standard, Jesus Himself was a murderer.”

So it’s a balance: sometimes you need to not defend yourself (like Jesus), and sometimes you need to fight. Pacifists, of course, deny the later, arguing that you should never fight. When interacting with people who hold this position, I often respond something like this. “Come on! The safety of our middle-class homes (which are only safe because of being protected by an armed police force) in a comparatively safe nation (which is only safe because it is guarded by the armed forces), gives you the luxury to sit around and talk about the ideology of pacifism. You’re happy to reap benefits that only arise because of those who are prepared to kill to keep you and your family safe! In this regard, the modern pacifist resembles 18th century British abolitionists who were happy to purchase sugar from slave plantations. If you really wish to be consistent, then why aren’t you calling for the disarming of prison guards? Why don’t you advocate the retreat of our defensive armed forces, thus enabling our enemies to invade our land unopposed?”

If saying that isn’t sufficient to persuade the pacifist, then I try to bring in a little historical perspective. Throughout much of history, our ancestors had to always be ready in case of attack. While modern life offers many challenges that our ancestors never faced (for example, the hunter-gatherer never had to be worried about where to find free wifi), and while the global community is just as dangerous as ever before, nevertheless, the modern West is comparatively safe for most of us, excluding considerations about abortion. Thankfully, when we go to sleep at night we don’t have to worry about bandits coming and kidnapping our children. If we live near waterways, we don’t have to worry about pirates coming to rape our women and kidnap our children. This means that discussions about pacifism can be abstract, and disconnected from real life ramifications. If I decide to become a pacifist, it doesn’t make any difference to my family because we are insulated against the consequences of this ideology. It can remain simply an ideology, detached from practical outcomes.

It is precisely because of the detached nature of modern pacifism, that it is helpful to make things practical by posing the classic hypothetical question that everyone asks pacifists: “So what should you do if… ” (followed by various scenarios in which a villain initiates a situation where your only choice is to kill in self-defense or else watch your loved ones die).

The Pacifist will usually refuse to answer questions like this on the grounds that hypothetical scenarios are artificially restrictive. Two things must be said in response to this. First, if pacifism really is the Biblical option, then why this hesitation about the thought experiment? I mean, if God really calls us to be pacifists, then why not exuberantly declare “While I don’t know what I would do, it’s clear that what I should do is to let the villain torture my family rather than for me to kill him.” Secondly, in most of human history, and in many parts of the world still, this type of scenario is not merely a hypothetical thought experiment, but a reality that many people have to be ready to face all the time. Again, it is only because of the ease and comfort of our life (made possible by armed personnel) that the modern pacifist has the luxury of declaring that this thought experiment is merely hypothetical and therefore not relevant to his actual life.

So next time you find yourself starting to be persuaded by pacifist arguments, stop and ask yourself the following questions:

I’d like to close with some reflections from Elder Thaddeus of Vitovnica, from his book Our Thoughts Determine Our Lives: 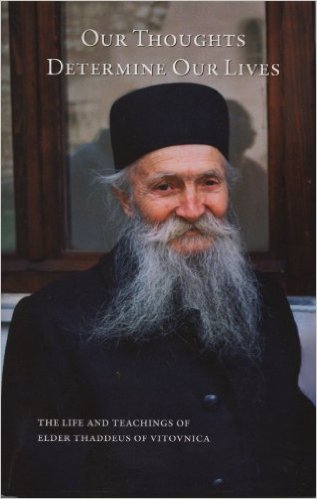 “We should defend one another, for we are brothers — especially we who are of one Faith. There is an example of this in history. Once, when an official delegation of Constantinopolitan dignitaries was sent to the Saracens to negotiate peace, the Saracens argued that Christians disobeyed God’s commandment. They said: ‘Why do you Christians disobey Christ’s commandment to love your enemies, but instead persecute and kill us?’

“Now a certain Cyril was part of this delegation. His answer to the Saracens was: ‘If, in a certain law, there are two commandments that must be fulfilled, which man shall be more righteous, he who fulfills both commandments or he who fulfills only one of them?’ The Saracens answered, ‘He that fulfills both, of course.’ Then Cyril said, ‘As individuals we forgive our enemies, but as a community we lay down our lives for one another. For the Lord has said that there is no greater love than to lay down one’s life for one’s neighbor. As a community we protect one another and lay down our lives for one another. Not only is your aim to enslave us physically, you also aspire to enslave us spiritually. It is for this reason that we defend ourselves. This, therefore, is justified.

“Then there is also the example of St. Ioannicius the Great. He was a soldier for twenty years. He was amazing — whenever he fought a battle, he won. He had never been defeated. He never gave a thought to his own life but laid down his own for others. And the Lord preserved him. Later, when he became a monk, he was a great saint and wonder-worker. There are many such holy warriors.”