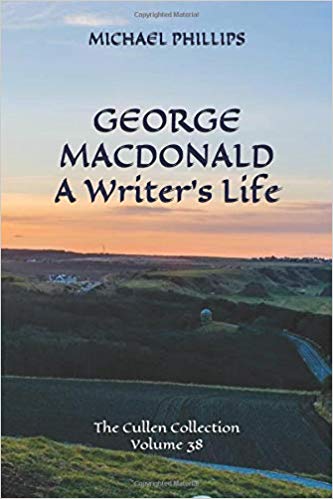 I can’t remember when I first heard of George MacDonald, but I do remember the first moment I realized I had an author as a dad. I always enjoyed going into the children’s section of the Christian bookstore my parents operated. There were all sorts of interesting books there and a nice comfortable couch. One day when I was sitting there reading I got up to stretch and wandered out of the children’s section. I came across a shelf with my father’s edited editions of MacDonald novels. I had never seen them before, and what caught my eyes was my Dad’s name on front. I remember thinking, “wow that’s kind of cool–my father is an author!” I thought it was so cool that I went and showed it to one of the employees who couldn’t quite appreciate my point.

As I grew a little bit older, I began to have a deeper appreciation for the MacDonald editions beyond the fact that my dad’s name was on the cover. They were fun to read and I enjoyed listening to audio recordings of them while I cleaned my room in the evenings. But more than that, I was impressed by the way MacDonald’s spiritual vision deeply touched so many people’s lives. Visitors came from all over America to visit us and talk about MacDonald, and even more people wrote to my father about how MacDonald had impacted their lives. My parents would often read these letters aloud at meal times. This wasn’t just ordinary fan mail, but people sharing how their lives and families had been radically transformed by MacDonald’s spiritual vision.

In my early twenties when I moved to the UK, I began dipping into the world of MacDonald scholarship a bit, as well as reading the Bethany editions to our kids. But after a while I lost interest in him. MacDonald was overshadowed by other interests. After moving back to the United States we joined a Calvinist church that was deeply skeptical of many aspects of MacDonald’s spiritual vision.

But then, about seven years ago I rediscovered MacDonald. When I rediscovered MacDonald, the thing that impacted me was the way he was able to show that a life of servanthood to God the Father is beautiful. Doing your duty as a Christian isn’t drudgery, but is an adventure. This was the aspect of MacDonald’s work that I tried to bring out when I published a brief biography of him in my 2012 book Saints and Scoundrels.

The notion that following God is beautiful relates to an idea prevalent in the classical world but which may strike many of us as peculiar. The idea was that it was impossible to pursue any particular good if one does not first perceive that good to be beautiful. Consequently, we find Plato suggesting that one of the purposes of education is to inculcate in students the right responses, so that they find what is good and true to be also lovely and worthy of adoration. To the ancients, a teacher’s job was not just to show forth the truth nor to inspire a student to pursue goodness, but to render both truth and goodness beautiful—to inculcate in students a sense that what is true and good is also beautiful. (I have developed this further in my post  ‘Virtue and Classical Education: A Commencement Address to a Graduating Class.’)

It’s helpful to think about George MacDonald as playing the role of a teacher in this classical sense. One of the reasons his imaginative works and his sermons have been so helpful to thousands of people is that through them he is able to convey that being good is beautiful, and that following the truth is lovely. He is able to show that there is no contradiction in being a good Christian and fully flourishing as a human being. MacDonald thus integrates obedience to Christ’s commandments with what is most noble in our nature. Consequently, we come away from his works excited about doing our Christian duty in the next five minutes.

This vision was conveyed in the MacDonald editions that my father published with Bethany House in the 80’s and 90’s, and yet there was always the sense of incompleteness. I remember watching on the sidelines as my father had battles with the publisher over their editorial whims and cover-art, and his frustration over the way he was forced to take the sharp edge off MacDonald’s vision to pacify the market forces that drove the publishing industry. So when I heard that my father had an opportunity to re-do the edited editions for Amazon Kindle, this seemed like a fitting fulfilment of his earlier work. As the project matured, however, I came to realize how ambitious it actually was. Not only was Dad planning to re-edit, line by line, his earlier editions, but he was also planning to issue new edited versions of all the realistic novels. A while later I learned he was writing all new introductions, accompanied by a new six hundred page biography of MacDonald.

I didn’t want to discourage my father, but privately I thought it was crazy for someone of his age to take on a project of this magnitude. To give you some idea of the scope of this project, it involved editing and proof-reading six million words, meticulously checking half a million commas, and writing for tens of thousands of hours.

I’ve worked most of my career as a writer and know how exhausting it can be. If I get two hours of writing done a day, I feel good. But Dad was putting in 14 hour days, often getting up as early as 3:00 AM in the morning to get started on the work. Absolutely crazy, I thought. I intentionally did not get involved, happy to leave the research and proof-reading to my parents’ team of volunteers.

And yet, somehow, he pulled it off. In October I had the opportunity to go to California for the launch of George MacDonald: A Writer’s Life, as well as the launch of thirty-seven new edited editions of MacDonald’s novels known as The Cullen Collection. During this launch I was privileged to team up with David Hiat to lecture on MacDonald and the imagination (our talk can be downloaded here and is #11).

One final word about this new biography. Some people may be wondering why we need another biography of George MacDonald. After all, there are already a number of good biographies out there, including one that my father wrote in 1987. The value of George MacDonald: A Writer’s Life is that it goes chronologically through MacDonald’s entire corpus, using the books themselves as a basis to tell the story of his life. It thus gives the reader a good sense of how events in MacDonald’s life, family and spiritual development informed his creative output.