In an interview for NBC’s TODAY, Tom Hanks talked about his role in the film A Beautiful Day in the Neighborhood. Sharing what he had learned from playing children’s TV celebrity Fred Rogers (1928-2003), Hanks summed it up by commenting, “It’s good to talk, it’s good to share the things we feel.”

For many children in the last half of the twentieth century, watching Mister Rogers’ Neighborhood may have been the only place they encountered the idea that emotions are okay.

END_OF_DOCUMENT_TOKEN_TO_BE_REPLACED

Since writing my article ‘Fred Rogers vs. Oprah Winfrey,’ I got a chance to see Tom Hanks’ new film A Beautiful Day in the Neighborhood. I thought it was a beautiful, moving film, and I came away wanting to be a better person. Interestingly, I went with a group of friends who were divided between those who loved the movie and those who hated it.

One of the people in the group who didn’t like the movie texted me the next day, saying he thought the film was opposed to the values of classical education.

Tertullian (155-220) once famously questioned what commonality there was between Athens and Jerusalem, indicating his suspicion of attempts among his contemporaries to synthesize Christianity with Greek philosophy. My friend asked a similar question, “What hath Mr. Rogers Neighborhood to do with classical education?” His answer was just as emphatic as Tertullian: NOTHING.

Well, that got me started, and for the rest of the day my poor friend was inundated with a series of text messages explaining why I thought the Mr Rogers’ movie was congruent with the values of classical education. (For me, any type of communication is serious discourse, even text messaging.) Below I will copy and paste my side of the conversation because it gets to the heart of something that is of profound interest to many of my readers, namely the relationship between classical education and emotional wellness. To respect my friend’s privacy, I will not be sharing his side of the conversation, although my replies do make reference to his objections.

Earlier this month I had the privilege of speaking at the “Gold Country Gathering” that my parents organized for fans of George MacDonald. I spoke about human flourishing, George MacDonald, and my upcoming book.

Dr. Phillip Cary sheds light on Plato’s philosophy in this latest edition of The Robin & Boom Show. In this podcast you will learn why the ideas of a thinker from the 5th century BC are more relevant today than ever before. Plato offers a valuable antidote to a culture in which goodness, truth, and beauty are so often perceived to be located in the purely immanent. Questions addressed in this podcast include:

In his book Good News For Anxious Christians: 10 Practical Things You Don’t Have to Do, the Christian philosopher Phillip Cary gives some examples of how our choices and habits affect our emotions. 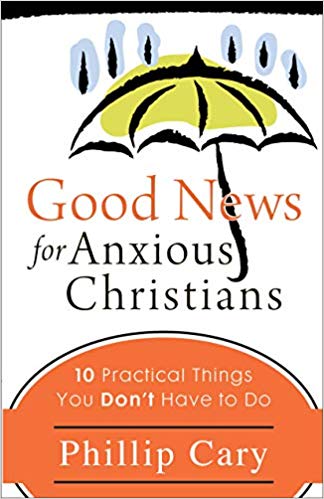 “There is indeed a sense in which we are responsible for our emotions, though in a different way from our choices, because of course we don’t control our feelings in the direct way we control our choices. You can’t just choose not to be angry the way you choose not to raise your hand. Yet we are responsible for the virtues and vices we develop, which are what tend to produce various kinds of feelings. If we make a habit of gossiping, for instance, we will feed our resentment of other people, which will bear fruit in anger and ill will and eventually cruelty. Whereas if we practice moral disciplines like speaking courteously with people we dislike or being kind to people who annoy us, the emotional shape of our hearts will also change for the better. It takes time, but we can train our hearts to leave their resentments behind, to starve the poisonous feelings in them, while practicing and nurturing the better feelings–even if that practice begins with outward actions like speaking a kind word when we don’t really feel like it.”

Elsewhere he explains how good habits are a composite of emotions, perceptions, choices and thoughts.

“A virtue is a habit that includes all of these things: actions (you take care of your child even when you don’t feel like it), emotions (you are often overtaken by feelings of tenderness and delight), perceptions (you understand your little children better than they understand themselves), choices (you choose to get out of bed and go to the children’s room even when you’d much rather not), and thoughts (you think differently, more thoroughly and carefully, about your children than about anyone else in the world).”

One of the recurring themes on this blog is the importance of gratefulness. So it may come as a surprise to my readers that this morning I am publishing a post on the virtue of complaining. But hear me out.

END_OF_DOCUMENT_TOKEN_TO_BE_REPLACED

Robin Phillips and Jason Van Boom continue the discussion with Mark Weisman on technology, empathy, attention and EQ. In this podcast you will learn what Elder Thaddeus of Vitovnica and the Great Tradition tell us about bringing attentiveness into our relationships. You will also learn the importance of slowing down to take a reflective turn, how to leverage neuroplasticity for good, and the relationship between the brain, body and emotions. Questions discussed include:
From the podcast:

“…be aware of what other people are feeling, and listen to the emotions behind what they are saying rather than just being quick to respond to surface issues. Go deeper and really try to listen with your heart and with empathy. Often we get into fights and arguments about issues that are really just proxies for deeper emotional issues, and these deeper emotional issues, when they’re not being adequately addressed or listened to, can cause problems abort issues that are not really the issue.”

Robin and Jason are joined by Mark Weisman to discuss some of the ways digital technology is eroding skills in empathy and emotional intelligence (EQ). Mark Weisman contributes to this discussion from his perspective working for years in the tech industry. In this podcast you will learn the difference between “emotional empathy” and “cognitive empathy”, and why EQ is central to human flourishing. You will also learn what the latest brain science shows about the corrosive effect of too much screen-time, particularly in brain regions associated with emotional maturity, introspection, expression recognition and emotional regulation. (For more on this topic, visit out emotional intelligence archives.)

What is classical education? How can the liberal arts fortify children against anxiety, depression and addiction? What was Charlotte Mason’s contribution to classical education? These are some of the questions that Robin and Jason explore with this week’s guest, Michael d’Esterre. Michael is a clinical social worker in Spokane Washington, who is turning to the liberal arts to find answers to some of our society’s most pressing problems, including mental disorders and addiction.